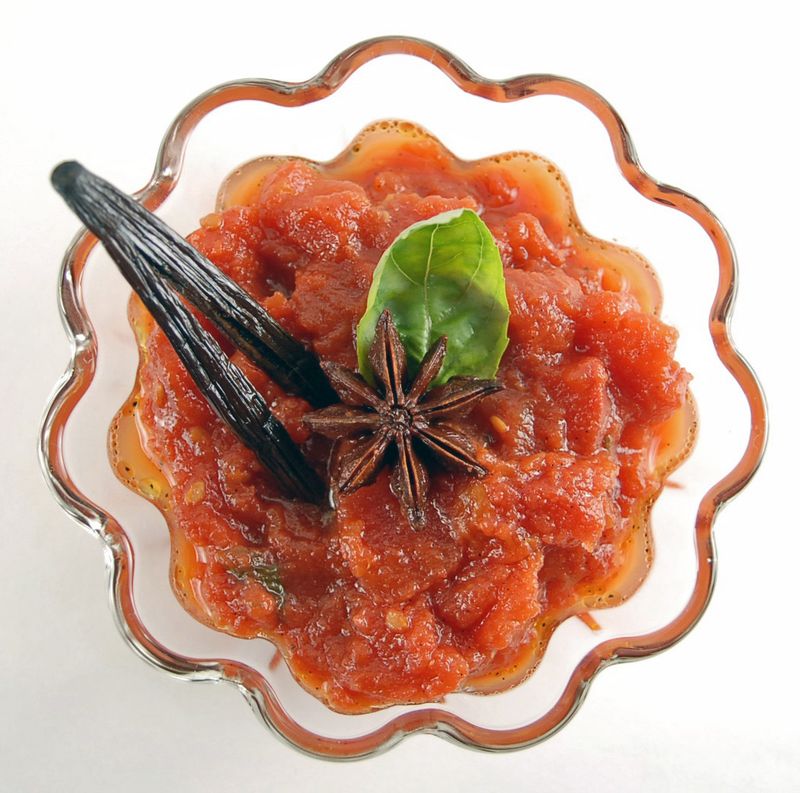 I know what you’re thinking….because when I first heard of this sauce (or I should say, the recipe that inspired this sauce), I thought the same thing too.

WHO IS THE FREAK THAT THOUGHT IT WAS A GOOD IDEA TO PUT VANILLA AND STAR ANISE INTO AN ITALIAN TOMATO SAUCE?

I’m right, yes?  This IS what you are thinking, and I was right there with you until I stopped for a moment to further reflect on this seemingly odd combination.  The fact is, many varieties of basil (which is part of the mint family) exhibit a mild licorice flavor similar to anise to begin with, and in fact there exists a variety of basil called Anise Basil that contains an even higher level than most of anethol, the same chemical that makes anise smell like licorice.

HMMM…PERHAPS THIS DUDE ISN’T ENTIRELY NUTS AFTER ALL.

I then recalled having had a number of desserts over the years that featured tomato confit flavored with vanilla, the most memorable of which was a roasted tomato tarte tatin, which to be honest was sublime.

So…..the anise is a natural compliment to the basil, and the vanilla-tomato combination has been shown to totally rock.

The apparently not so freakish guy I am referring to is Chef Novelli of the Chef Academy, and this recipe is my take on his “Grandma Louisa’s Tomato Sauce”.  I first learned of Chef Novelli when my foodie friend Lisa P. sent me this link to a Bravo TV video in which he demonstrates the sauce.  She had a friend who had tried the dish and loved it, so I filed the recipe in my “to try” pile where it languished for months until I finally reached for it a few days ago when looking to make a marinara for the Chicken Parmesan Burgers we were cooking that night.

It is a simple sauce to throw together, especially when using canned tomatoes (Chef Novelli calls for 6 pounds of fresh ones), and really only requires a little patience as you VERY SLOWLY cook it over a low heat.  I adapted the recipe to use canned tomatoes because I am one of those people that really only eats tomatoes when they can get them locally and at the peak of ripeness, and as a resident of the northeast, that means I am eating tons of them each August, and hardly any the rest of the year.  When my perfect local tomatoes are gone, I rely on canned “San Marzano” tomatoes from Italy, or “Muir Glen” canned tomatoes, which are domestically produced.  Both offer consistently ripe and delicious tomatoes that I can use all year round.

This sauce, with its rather unusual ingredient list, is a real treat.  It is a wonderfully complex marinara that presents all its flavors in a subtle way.  Play a little game when you serve it, and see who can guess what the secret ingredients are.  People will definitely know that it is different, but may struggle to figure out exactly what is in the sauce.  The look on their face when you tell them it is vanilla and star anise will be worth something.  Try it, and like me, you will be thanking Chef Novelli, and his brilliant Grandma Louisa.

END_OF_DOCUMENT_TOKEN_TO_BE_REPLACED 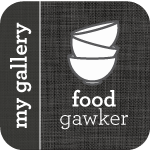