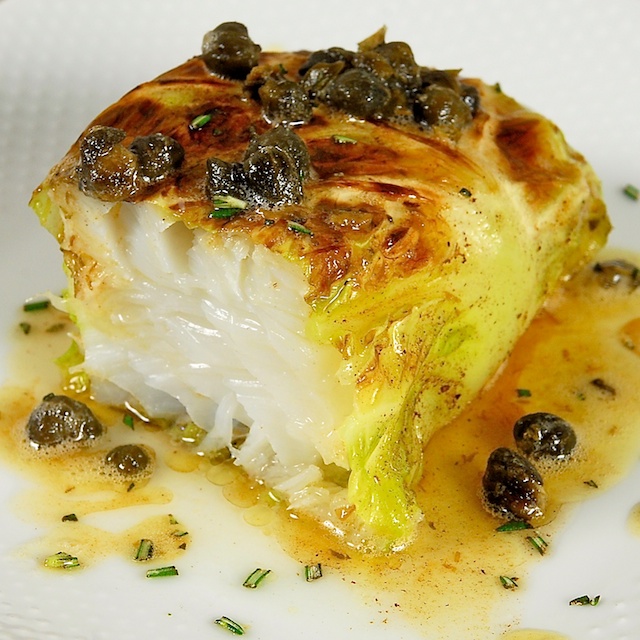 By the time I finished my training at Le Cordon Bleu, I had sworn that I would never again cook a dish that required my wrapping anything in a cabbage leaf.  Why?  Because over the course of my time there, it seemed that we spent an inordinate amount of time cooking things in cabbage, and to be honest, I wasn’t a big fan.

Training at the school is broken into three trimesters, the first concentrating on the very basics of knife skills and cuts, and learning the ins and outs of culinary building blocks such as stock, roux etc.  The second term is designed as a tour around regional France, with each week or so dedicated to exploring the classic dishes of the country’s varied regional cuisines. In the final term we stepped things up and created modern, internationally influenced “restaurant” quality dishes.

It was during the second term, when we were focusing on traditional regional dishes that we stumbled through an area of the country that seemed to like all their food cooked in cabbage.  I had never really liked the stuff as a kid, and had fairly successfully avoided it in all its forms as an adult, but as I was then committed to studying classical French cuisine, cabbage was to be part of my life. As if having to cook with cabbage first thing in the morning wasn’t bad enough, we even prepared a few dishes where something was stuffed into a cabbage leaf, and THEN wrapped in what the French call crepine (caul fat to all you English speakers out there).

Caul fat is a fatty membrane that is peeled from the exterior of a cow’s stomach, and while it pretty much melts away over the course of cooking a dish, working with it in its raw state was quite an eye opener for most of us.   After a couple of weeks of working with the stuff I found that nothing would put me off my morning coffee faster than walking into first period demonstration-lecture, and seeing the chef’s station prepped with heads of cabbage and an overflowing bowl of caul fat soaking in water.

I could only weep……S’il vous plait, pas encore.

Imagine my surprise then when a few weeks back I spied a rather tasty looking dish in Bon Appetit magazine that called for wrapping a piece of halibut in cabbage. Now to be honest, it was more likely the browned butter-caper sauce and not the use of a cabbage leaf that got me all hot and bothered, but once I confirmed that no caul fat was needed to make the dish, I decided it was time to see if enough time had passed to allow cabbage to work its way back into my culinary repertoire.

The original recipe is from the talented chef Maria Helm Sinskey, the Culinary Director of her husband’s truly wonderful Robert Sinskey Vineyards in Napa, California.  While I’ve tweaked both her ingredient list and cooking technique, the final dish remains fairly true to her original.  I ended up using cod instead of halibut because halibut is so hard to come by here, added chicken stock instead of water in the fabrication of the sauce, added some freshly minced thyme to the caper butter for a little more complexity, and finally added some acidic lightness by squeezing the juice of 1/2 a lemon into the sauce just before plating.

The final result was so tender and tasty, that this dish alone has earned cabbage the chance of a comeback in my kitchen.  Even better, the girls, while at first skeptical at seeing their beloved piece of fish wrapped in GREEN FOOD, snarfed the whole thing down and were eager for seconds.  Engage one of your kids in making the little fish and cabbage purses, it was a fun exercise that Muppet mastered in minutes.

by: Adapted from a recipe by Maria Helm Sinskey
yield:
Cooking ModePrint Recipe