Despite their name, sunchokes, often called Jerusalem Artichokes, are not from Jerusalem nor are they artichokes.  Members of the daisy family, the plants that grow above these tubers resemble sunflowers and can grow to 10 feet tall.  The Italian word for sunflower is "girasole", and it is thought that Italian immigrants that settled in the Northeast US, where sunchokes were abundant, attached this name to them and over time it morphed from girasol to Jerusalem.  Who knows how they got their name really, but this explanation is as pausible as any other I've found, so I'm sticking with it. While sunchokes look much like ginger root, their flavor and consistency more resembles a potato, though they are much less starchy and exhibit a nutty sweetness that potatoes lack.  They can be sliced thin and eaten raw in a salad, baked or boiled and mashed like potatoes, or eaten as we have here, sliced thick and roasted to golden perfection.  Use them as you would a potato, along side your favorite meat.  We ate these with a quickly grilled skirt steak served up with a mint-parsley chimichurri….YUM! 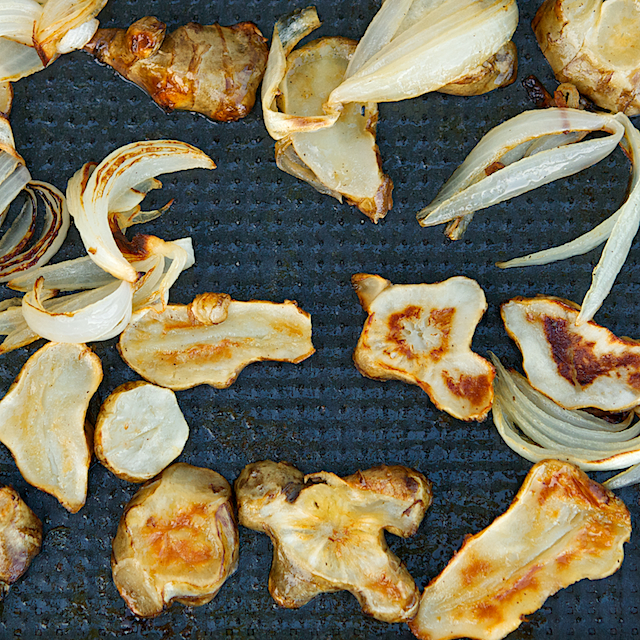 Sliced and roasted…hot from the oven.

Depending on where you live you may or may not have much luck finding these.  Here in the Northeast they are everywhere in the autumn months, so be a good seasonal cook and go find some now before it's too late!

slightly adapted from a recipe in Cooking Light Magazine

Serves 4 as a side dish