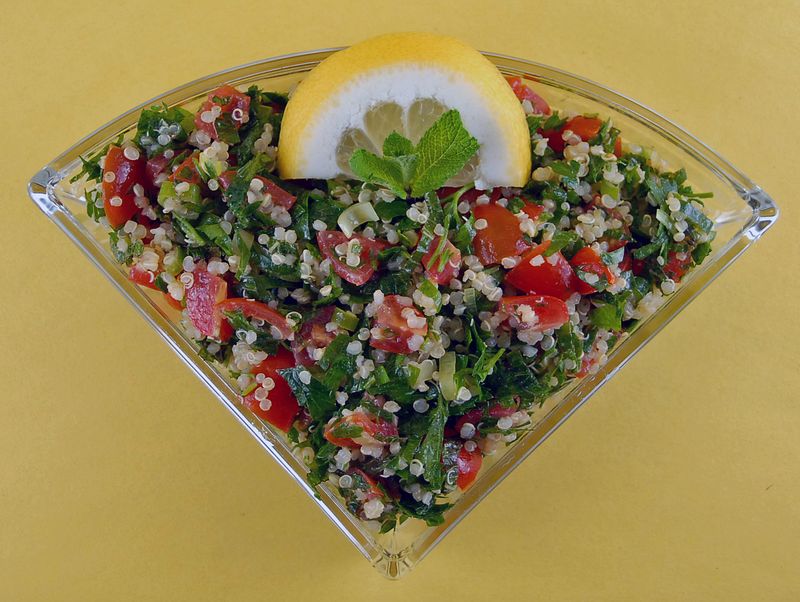 I must admit that I felt a little like Heidi Swanson the other day when working up this recipe.  No, it wasn’t ’cause of how I looked in the stylish skirt I was wearing ;-), but rather this quinoa and veggie treat is exactly the kind of thing that Heidi presents so beautifully on her blog, 101 Cookbooks every week.

Growing up in Vermont, with an Italian mother manning the stove, I didn’t grow up eating anything quite so exotic as middle-eastern cooking.  In fact, it wasn’t until I married my wife, who is of Lebanese descent, that I was finally exposed to more than just the very basics of middle-eastern cuisine.  Since then, I have come to love not just the ubiquitous hommus, falafel, and baba ghannouj, but also dishes like fatayer, kibbe and tabbouleh.

Tabbouleh which comprises of parsley, mint, and tomatoes all tossed in a lemony dressing, is traditionally made with cracked bulghur wheat, but my wife’s father, George, has taken to making it with  quinoa recently, and we love it this way.  George who is a terrific cook in his own right, has a bit of a reputation for…how shall I say this….”experimenting” with recipes in the kitchen.  Let’s just say that he has a liberal hand where ingredient substitutions are concerned, and there is well documented family lore of the successes celebrated, and failures endured as he has enjoyed his creative culinary journey over the years.

I am happy to report that this dish clearly lands in his success column, and while we weren’t working from his recipe per se (not even sure there is one), this creation is clearly inspired by George’s Tabbouleh.  Serve it as part of a traditional middle-eastern mezze, or as we normally do, as a light salad side-dish with grilled chicken, fish or lamb.