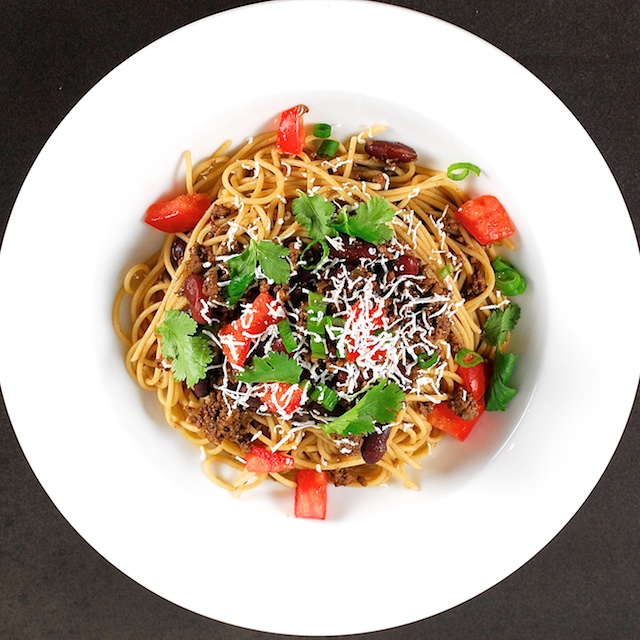 As I struggled the other day trying to decide whether to cook pasta with meat sauce or chili for Superbowl Sunday dinner, I thought of my friend Kathy Bechtel who writes the great cooking/travel blog “Chefbikeski”, and a dish she had mentioned to me a while ago, Cincinnati Chili.  Prior to our chat, I had never heard of the stuff before, and at first thought it was little more than a regional variant on chili that introduced a few different spices to distinguish the dish from something like a Texan chili, much in the same way BBQ is unique depending on where you eat it, be it Kansas City, Houston, or Memphis.

It turns out that what defines chili in Cincinnati is not a special spice mix or meat blend, but the fact that some culinary genius in that city years ago decided NOT to choose between pasta and chili one night for dinner, and crafted a dish that combined the two.  I’m guessing that it was this same spirit of American innovation (and our disdain at having to choose between two things that we really want) that lead to the most famous of these seemingly odd culinary couplings, the surf and turf.  Can’t decide between the lobster and the steak?  Don’t you worry your little head about it, in the land of the big plate you don’t have to choose, you can have them BOTH.

While I’ve never been a big fan of surf and turf (I find the concept somewhat schizophrenic), I’m a huge fan of this pasta and chili mash-up. Truth is, it’s a melting pot spin on the Italian classic pasta bolognese, one that can be amped and modified in ways that you normally wouldn’t with a bolognese.  Think about it, most people just add a grating of fresh cheese to a bolognese, the only variation being the type of cheese you decide to use, one day a parmigiano, the next a pecorino romano….yawn.  With this dish, the sky’s the limit…think of all the things you might put atop a bowl of chili, and you’ll understand what I’m talking about.  Think cilantro, jalapenos, shredded cheese, tabasco, salsa, chunks of avocado, scallions….heck, you could even toss a dollop of sour cream on and it would taste delicious.

This particular recipe features an unusual (but delicious) chili made with ground lamb, cocoa, and a sweet rather than hot spice mix. We all loved it, but if you have a favorite chili recipe your itchin’ to make, or better yet, some already made in your freezer, by all means use it instead.  We served ours over some whole wheat spaghetti, and it was a perfect Superbowl Sunday meal.