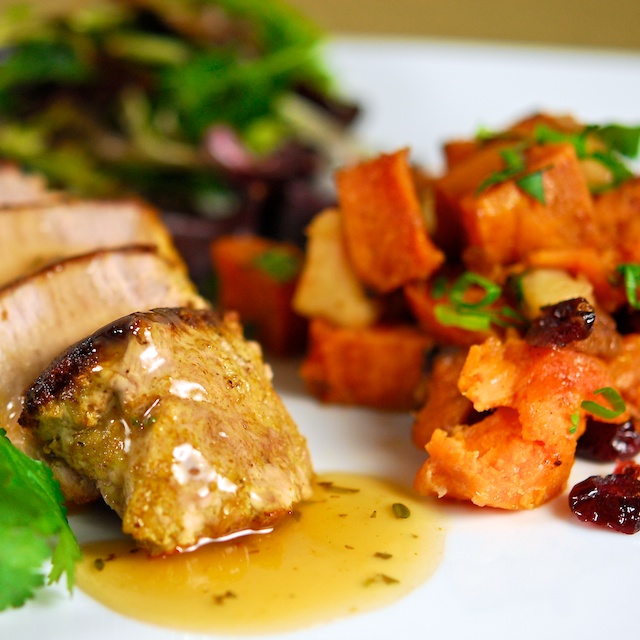 Jessica Goldman, the lovely food writer who brings us the delicious and informative blog, Sodium Girl, tweeted me last week and asked me to join her, and a number of other bloggers in what she is calling her “Love Your Heart Recipe Rally”.  For the event, she is asking participating bloggers to rework a favorite “sodium heavy” recipe into one that would be considered “sodium-free” (or at least “sodium-light”), then blog about the dish, posting on Friday, February 18th….yes, that would be today.

The rules of engagement were pretty straight forward, we had to identify our original recipe’s salty ingredients, eliminate them, and recreate the recipe with as little sodium as possible – i.e. no salt (duh), no salted butter (ouch), and no products that contain sodium content higher than 40mg per serving – or “very low sodium” according to the American Heart Association.

A very cool idea, I thought.

That was, until I told my wife about the invitation, then had to endure the humiliation of watching her double-over in laughter at the mere thought of my cooking a low-sodium meal.

“Are you kidding me….Sodium Girl contacted YOU as a resource for a low-sodium recipe…there must be some mistake.”

“You can’t be serious.  She must have included you on a dare from somebody…..yeah, that’s it.  She must have put the question to some other blogger friends of hers, “who would have the hardest time cooking a low-sodium meal?”, and of all the bloggers on the net, your name came in at the top of the list!  Think about it, they probably want one blogger who just can’t do it in order to make all the rest of them look like geniuses…..you’re their FAIL GUY!”

“Hey….you’re starting to hurt my feelings.”

“Oh….so you don’t see the humor in this at all?  You, Mr. Duck confit is my favorite food.  You, who cooks with SIX different types of SALT!  You, who brines anything, that when living, used to squawk or oink.  You, who would put soy sauce on his breakfast cereal if it wouldn’t set such a heinous example for the kids……Puhleez!”

Well, maybe not totally…..I mean, I have been professionally trained and have some pretty solid technical skills, so at least I’ve got that going for me.  Of course I did my training in France, and to be honest, over the course of my two years working in French kitchens I think I only heard the phrase “trop salé” (too salty) uttered once. It was practically impossible to over-salt a dish in the eyes of the chefs training me.  I was much more apt to get smacked with a curt little “vous avez oublié le sel encore?” (you forgot the salt again), even after having added some with a very heavy hand.  Hmmm…., perhaps my training will prove to be more of a liability than an asset in this low-sodium challenge….merde.

Anyway, while I may not be the most obvious choice to join the “Love Your Heart Recipe Rally”, if Sodium Girl is looking to really challenge her participants, and get them to stretch and create beyond their comfort zone, then she’s found the perfect little guinea pig in me!

Joking aside, Jessica has crafted a very worthy event and I am honored to be a part of this little experiment.  Fact is, even those of us who are not on doctor’s orders to limit or eliminate sodium in their diets (like Jessica is, you can read her story here), there are huge health benefits to moderating our intake of the stuff.  We are a nation that regularly consumes over two times our daily recommended intake of sodium. High sodium consumption raises blood pressure, and high blood pressure is a major risk factor for heart disease and stroke, the nation’s first and third leading causes of death, respectively.

While we only need a small amount of sodium to keep our bodies working properly (between 180 mg-500 mg a day), The Institute of Medicine recommends 1500 mg of sodium per day as an adequate intake level for most Americans, and advises everyone to limit sodium intake to less than 2300 mg per day, what they call the “tolerable upper limit”. On average, Americans consume over 3,400 mg a day….OUCH.

Do I have your attention now?  Good….on to the cooking!

As a recipe to rework, I’ve chosen a pork dish that I posted here not too long ago,” Ming Tsai’s Pork Tenderloin with 5 Spice Apples”.  Why?  Because as much as I love it (and I REALLY DO), it is a real salt-lick of a dish with the pork tenderloin brined a day in advance with BOTH kosher salt AND soy sauce. Ming calls for serving the pork with a salt-added spiced apple relish, and a whipped sweet potato dish that he makes more savory than sweet with the addition of cream, butter, garlic, and ginger (and, yeah you guessed it, more than a little salt).  If you take a look at the original recipe post, I think you’ll agree that this baby is a perfect choice for a low-sodium make-over.

My plan of action was pretty straight forward in reinventing this dish.  First, I had to eliminate the brining of the pork, but wanted to come up with an alternative method of bringing moisture and flavor to what would otherwise be a rather bland pork tenderloin.  I did this by deciding to cut the pork into 1- 1/2 to 2″  thick medallions rather than roast it whole as in Ming’s recipe, this was to give each piece more surface area to season; I then dusted each piece on all sides with curry powder.  To replace the moisture lost by not brining, I concocted a no-salt-added sauce of reduced apple cider, unsalted butter and fresh thyme.

I then decided to combine his apple and sweet potato elements into one side dish and to go more sweet than savory as a way to avoid using any salt.  One of the challenges of Ming’s sweet potato puree is that it calls for a lot of cream, and while it makes for a fabulous richness and mouthfeel, it dulls the flavors of the potatoes, garlic and ginger so much that the dish requires the addition of a fair amount of salt to bring it all back into balance.  So, in order to avoid getting spanked by Sodium Girl, I decided to roast the sweet potatoes in some maple syrup and ginger to enhance their sweetness and give them a little kick, then toss them with some sauteed apples, some nuts for crunch, a few cranberries for their sweet-tart goodness and color, and a touch of lemon juice for a bright acid note.

I’m pleased to say that the meal turned out beautifully, full of vibrant flavors and textures and not a lick of added sodium.  I served it all with a simple green salad with a homemade (no salt) vinaigrette, and a hot, crusty loaf of bread….YUM!

A quick note of thanks to Jessica for including me in this fun event, it was an educational exercise not just for me, but f
or the whole family, as we all learned a bit about the dangers of too much salt in our diets, and a few culinary tricks to avoid using it in our cooking….and now you all have too.

For the apple cider sauce:

For the roasted sweet potatoes and apples:

for the roasted sweet potatoes and apples:

for the apple cider sauce:

for the pork tenderloin: