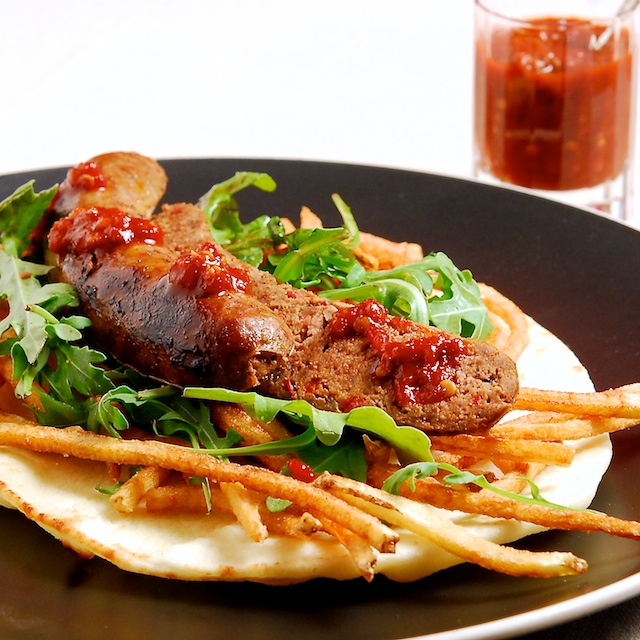 “THE POWER AND THE GLORY: ANIMAL FAT, SALT, AND THE PIG COME TOGETHER IN ONE OF THE OLDEST, DIVINE-YET-HUMBLE CULINARY CREATIONS KNOWN TO HUMANKIND”………

So begins Chapter 4 of Michael Ruhlman and Brian Polcyn’s fabulous book, “Charcuterie”, and to this, all I can say is…..amen, brothers.  Never before has the beauty that is sausage been described more accurately and succinctly than Michael does here……I get goosebumps every time I read these words.

As you may have already guessed, the challenge this month laid down by the High-Mistresses of Charcutepalooza, Mrs. Wheelbarrow (Cathy), and The Yummy Mummy (Kim), was to craft homemade sausage.  In doing so, we were to add to our growing list of experiences in all things charcuterie. So far we’ve hot smoked, brined, and salt cured, and for this month (at least for me), we’re breaking out the power tools for a little “grinding and stuffing”…..hallelujah!

When I first read that May’s challenge was to make sausage, and that Merguez sausage was suggested, I knew immediately how I planned to use the rewards of our labors.  Merguez is one of my favorite sausages, made with lamb, pork fat, red peppers, garlic, salt, paprika, pimenton, some red wine, and fresh oregano.

While a student at Le Cordon Bleu in Paris, I fell in love with “merguez-frites”, a famously French treat made with the spicy lamb sausages that hail from North Africa.  I used to regularly nosh on the most delicious merguez-frites sandwiches that I used to grab at a little Middle Eastern take-out joint right around the corner from the school.  Picture this…..a freshly made baguette from the bakery across the street, sliced along its length and stuffed with hot, salty fries, some spicy merguez sausages, and finished with a generous slathering of mayonnaise and harissa.

It may seem odd that one of my fondest food memories of having lived in Paris for 2 years is this humble little sandwich, but I’m here to tell you that it is one of the things I miss most about my time there.  So, how excited was I to find a killer merguez recipe in “Charcuterie”, and finally be in a position to put my Kitchen-Aid meat grinder and sausage stuffer attachments to good use?  I was plenty excited thank you very much, as were the boys who were all here to revel in the joys of homemade sausage making.

The recipe we used for making the merguez came straight from Charcuterie: The Craft of Salting, Smoking, and Curing

, and for the homemade frites, we followed this method here.  All the ingredients for the sausages were easy to come by, I ordered the lamb shoulder from my friends over at D’Artagnan, and picked-up the sausage casings on-line as well.  Everything else required were items I already had in my pantry, the oregano was from my garden.  I decided to make the sandwiches on a flat Arabic bread that I bought at our local market, and added some fresh baby arugula to the mix because even for ME, eating a meal that consists of nothing but meat, fat, bread, fried food, and mayonnaise, is a bit much…..I must be getting old.

Here are some photos of me and the boys crafting our DELICIOUS merguez sausages, the recipe (if you want to call it that) for our sandwiches follows.  We had such a blast making these, and they were so far superior to any sausage we could buy at a store, that we are already busy working up a list of sausages we want to make for freezer stocking. 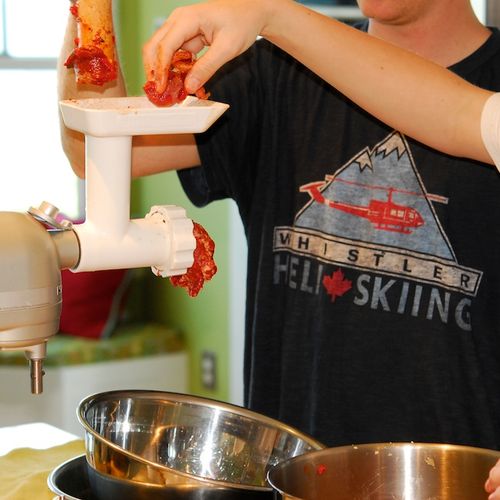 Arthas and Me stuffing the casings. 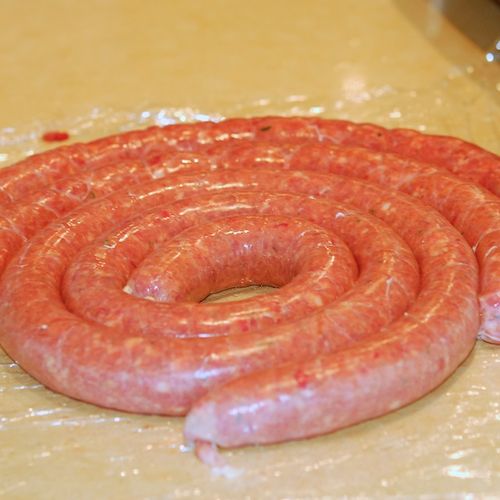 Long sausages, hot off the press! 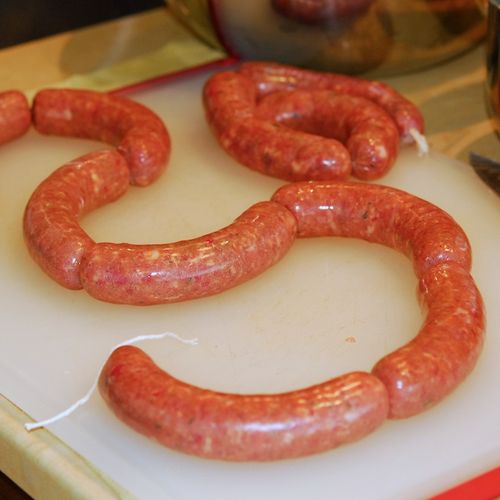 Finished links, ready for some time in a hot pan.