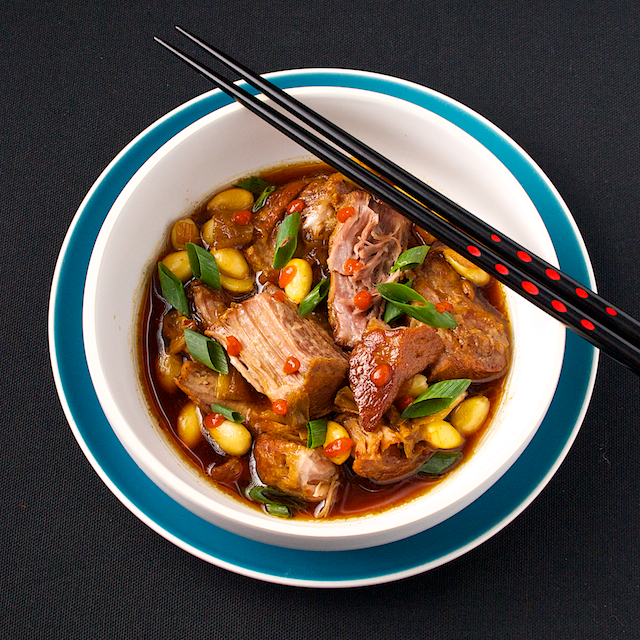 This is a recipe I adapted from one that recently ran in Fine Cooking, and that I made last week when our weather was stuck on cool, rainy, and generally crappy.  On days like that I find it helps to fire up some great smelling kitchen projects to keep all our spirits up.  Things like a loaf of freshly baked bread, a long simmering pot of rich bolognese, a few sheets of chocolate chip cookies, or a multi-hour braise like this dish.

At about 2 hours in, the aroma of this meal bubbling along in the slow cooker, like a siren's song, called everyone from the far reaches of the house to check and see what was cooking.  News that the meat had to cook for another 4 hours or so caused a bit of a stink, but hey, some things in life just can't be rushed.  Like the 6-7 hour process of slowly breaking down the fat and collagen found in the pork shoulder used to create this dish (when shopping you'll be looking for a 6-7 pound pork shoulder, sometimes marked as a "Boston Butt" – don't ask me why, given that a pig's shoulder and butt are two very distinct and seperate parts of the animal).  When cooked for this length of time, the pork is rendered so tender and juicy you can cut and eat it with a spoon, and a dull one at that!

I changed the original recipe in a couple of significant ways.  First I browned the meat well before tossing it into the slow cooker because in my book, not doing so is like throwing away a whole layer of flavor-building that is critical to the success of any meat dish.  Second, we upped the amount of fresh ginger called for ….just because.  Finally, rather than use chestnuts tossed in at the beginning of cooking as instructed, we tossed in blanched almonds about an hour before cooking was complete, preferring their earthy crunch to the sort of sweet, melting-soft texture of the long cooked chestnuts.  The meat and vegetables are so tender by the end of cooking, I think the snap of the almonds lends a nice textural counterpoint. 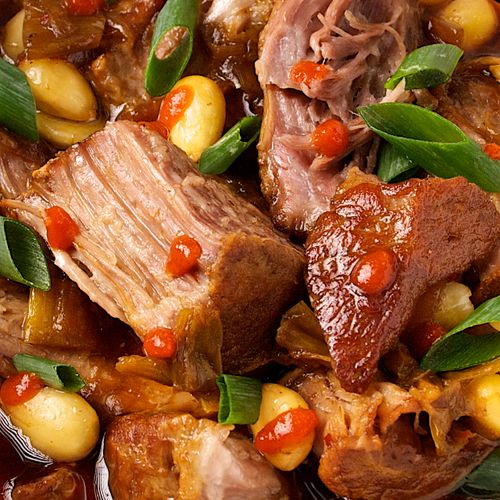 Serve this brothy stew over brown rice as we did, some white rice if you're looking to keep this dish more ethnically pure, or some udon noodles if you're feeling slurpy.  Topped with some freshly sliced scallions and a few squirts of sriracha, a few bites will render you oblivious to whatever the weather outside.  Keep any leftover meat stored in the sauce in your fridge, and stay tuned for a great second recipe to make from this super tasty dish!