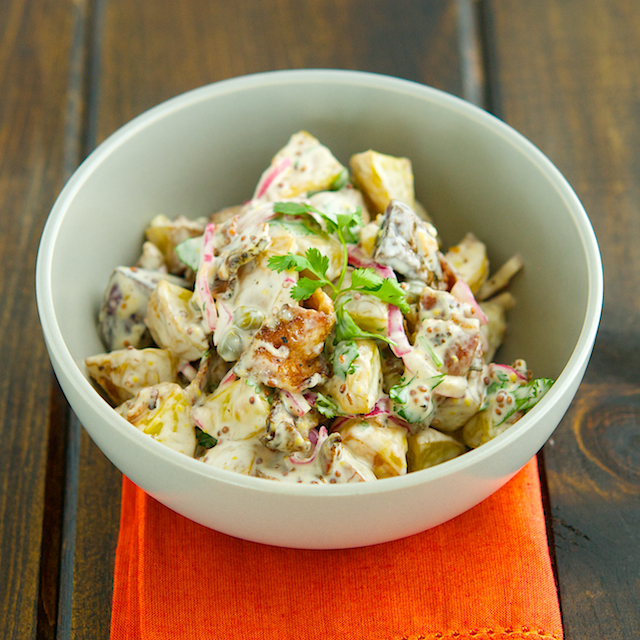 I first came across this salad over a year ago on my friend Stacey's awesome blog, Stacey Snacks.  I filed it away in Evernote where it has sadly resided unused ever since.  I first reached for it a couple weeks ago when we gathered friends together for a BBQ to celebrate Jordan's graduation and it was such a hit that I made it again just the other day when my folks were in town as a side to one of my favorite steak dishes.

As we all know, bacon makes everything better and pairing the crispy pig pieces with caramelized roasted potatoes, briny capers, and fresh red onion and cilantro make for a super tasty and slightly unconventional potato salad.  Don't worry, the whole shebang is still tossed in a silky mayo based dressing, so it won't feel totally alien to all of you lovers of more conventional spud salads, but tossing the potatoes with the dressing when they are still slightly warm helps the final salad to feel more balanced and less overwhelmed by mayonnaise.

Give this one a try the next time you fire up the grill, you're gonna LOVE it!

by: adapted from a recipe in: The L.A. Times - December 2008
notes: Serves 8-10
yield:
Cooking ModePrint Recipe