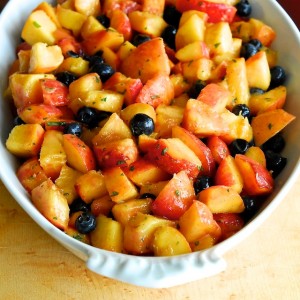 I found some delicious, locally grown peaches at the market the other day, and they looked so good in their cute little wooden box that I had to buy them.  There were about 12 of them in the crate and were still a bit hard when I bought them so I left them on the counter to continue ripening for a couple of days.  When they seemed to have softened enough, my wife and I cut into one for a lunchtime dessert and were thrilled with how great they were, so juicy and very sweet.

Of course, the problem with peaches (and most fresh fruit for that matter) is that once they attain their peak of freshness, they begin a quick downhill sprint to the land of rot.  If we only had one or two to snarf down in a hurry I wouldn't have worried much, but with a ten or so peaches left, and most of our clan off at various camps this week, I was afraid we'd lose all the lovelies to our ever present summer battalion of fruit flies, before we had a chance to enjoy them.

END_OF_DOCUMENT_TOKEN_TO_BE_REPLACED 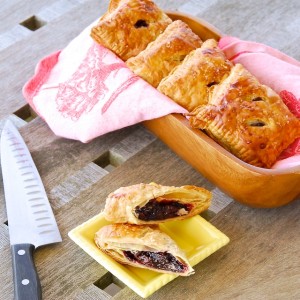 It seems that over the past year whenever we had guests that offered to make a pre-dinner nibble to have with cocktails, they decided to craft something using frozen puff pastry dough.  Given that each of these folks brought a fresh box of pastry sheets with them, and used only half a box to make their appetizer, we recently discovered that we had 83 half used boxes of puff pastry in our freezer (no wonder we're running out of room there).

As I was starting to panic, wondering what the #@*& we were going to do with that many pastry sheets, my wife found this simple but delicious recipe in our latest issue of Bon Appetit.  This recipe is for little cherry pies, using a combination of fresh and dried fruit, but any type of fruit would work.  Beware though, if you're using a really juicy fruit you may need to up the amount of cornstarch used in order to guarantee a nice thick filling for your pies.  I'm thinking fresh apples and dried cranberries would be lovely, or how about peanut butter with a fresh strawberry compote, or dare I say, Nutella with some orange marmalade?  Oohhhh…..

END_OF_DOCUMENT_TOKEN_TO_BE_REPLACED 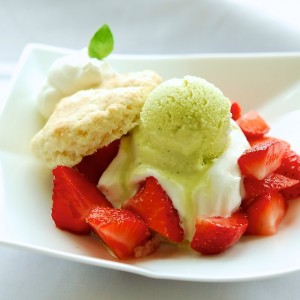 This is a recipe for all you Gleeks out there.

Huh?……you don’t see the connection between this delightful confection and the runaway success that is GLEE?

END_OF_DOCUMENT_TOKEN_TO_BE_REPLACED 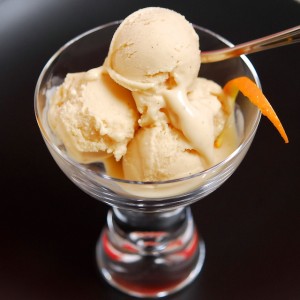 How many of you have ever made your own ice cream?  It's really easy isn't it?  I mean, whether you've got a motorized "old-style" bucket ice maker, one of the cool Cuisinarts where you pre-freeze the canister insert, or a full fledged commercial monster with it's own built-in compressor (like me, he says shamefully), making home-made ice cream is one of the most rewarding things you can do in your kitchen.

And your kids….are you kidding me?  Want to be their hero…….like, forever?

Make ice cream with them and bask in all the glory that is rightfully yours.

END_OF_DOCUMENT_TOKEN_TO_BE_REPLACED 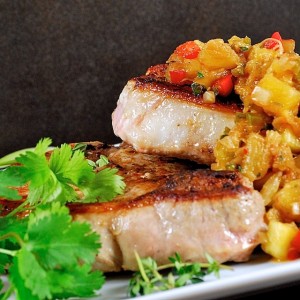 In case you hadn’t yet noticed, I LOVE PORK.   I can’t think of a beast more giving (in a culinary sense), than our friend the noble pig.  From the belly, to the hock, the loin, the shoulder, and the jowl, the pig offers so many tasty cuts of meat, that can be cooked in such a wide variety of ways, that the sky’s the limit as to what you can create with a little imagination.  That said, and I hope I don’t disappoint too many of you nose-to-tail folks out there, while there are those who will eat just about anything that can be gleaned from a pig, I do have my limits.

END_OF_DOCUMENT_TOKEN_TO_BE_REPLACED 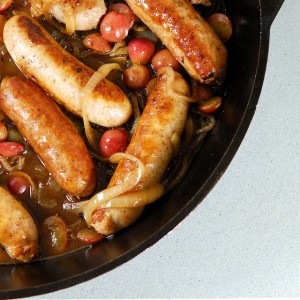 While I’m pretty good about cleaning up after myself when cooking at a leisurely (weekend) pace, I’ve been known to leave quite the debris field in my wake when slamming to get a weeknight meal on the table for the family.  And so, my wife loves it when I make a one pot meal on a weeknight, especially one that is as tasty as this one.  You see, while we have a rotating schedule of kitchen duties that gives everyone a chance to be a sous-chef, table cleaner, pot washer, or drier, it seems that my wife more often than not swaps duties with one of the kids and finds herself up to her elbows in soap suds cleaning up the mess I’ve left in the kitchen.

END_OF_DOCUMENT_TOKEN_TO_BE_REPLACED 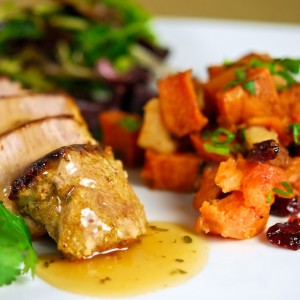 Jessica Goldman, the lovely food writer who brings us the delicious and informative blog, Sodium Girl, tweeted me last week and asked me to join her, and a number of other bloggers in what she is calling her “Love Your Heart Recipe Rally”.  For the event, she is asking participating bloggers to rework a favorite “sodium heavy” recipe into one that would be considered “sodium-free” (or at least “sodium-light”), then blog about the dish, posting on Friday, February 18th….yes, that would be today.

The rules of engagement were pretty straight forward, we had to identify our original recipe’s salty ingredients, eliminate them, and recreate the recipe with as little sodium as possible – i.e. no salt (duh), no salted butter (ouch), and no products that contain sodium content higher than 40mg per serving – or “very low sodium” according to the American Heart Association.

A very cool idea, I thought.

That was, until I told my wife about the invitation, then had to endure the humiliation of watching her double-over in laughter at the mere thought of my cooking a low-sodium meal.

END_OF_DOCUMENT_TOKEN_TO_BE_REPLACED 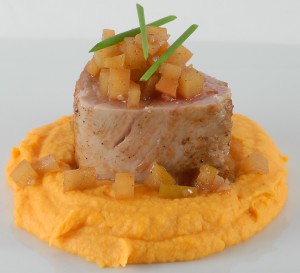 This is the first Ming Tsai recipe I ever cooked, and it remains my favorite.

First, it is absolutely delicious and requires no hard-to-come-by ingredients.  Second, with the exception of the brining which takes a little advance planning, the meal is very quick to put together.  Third, with just a little extra effort it can be quite gorgeous on the plate.  For a weeknight family meal, a dollop of the pureed potatoes, a couple of slices of pork, and a spoonful of apples and you are good to go (don’t feel like making the apples, put a little Chinese Five Spice Powder into your favorite applesauce, and you’ll have an easy substitute).  For a dinner party or special occasion, plate it as I have in the photo above, and its a real stunner.

END_OF_DOCUMENT_TOKEN_TO_BE_REPLACED 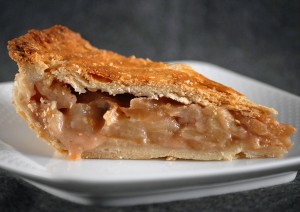 I’m not much of a Facebook guy.  Any of you who have been to my Oui, Chef Facebook Fan Page, can undoubtably attest to that fact…..sorry.  I set up the page on a friend’s recommendation because “everyone” has one, so I should have one too.  Problem is….I can’t figure out what the #$%& to do with it, so all it really contains are re-postings from my blog….ugh.  To the 310 of you who have become my fans (Thanks!), please accept my apolgies for there not being anything more compelling on the fan page than what you find here.  If any of you have any recommendations as to what I should do on my fan page, please let me know….I’m all ears.  Perhaps one day I’ll figure it out on my own, but I wouldn’t hold my breath if I were you.

I’m really no better with my personal Facebook page, in fact, I’m starting to think that I just don’t get the whole Facebook thing.  All my “friends” find on my page are linked posts from this blog….I”M SO BORING.  I mean, I’ve enjoyed reconnecting with old acquaintences from high school and college, but after a brief “hey nice to see you’re still alive”, and a “so what are you doing to keep yourself busy these days?”, I quickly run out of things to say.  It’s not that I don’t care.  Well, that’s what I keep telling myself anyway.

END_OF_DOCUMENT_TOKEN_TO_BE_REPLACED 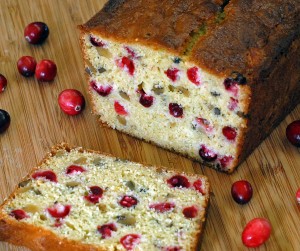 This recipe is from the simply gorgeous Elise Bauer of Simply Recipes, and is a really terrific take on this New England favorite.  Having some cranberries to use up after making last week’s cranberry tart, I was determined to find a new recipe for one of my favorite cranberry studded treats, cranberry nut bread.  I cruised the web looking for the best recipe I could find, and while I came across tons of them, found Elise’s to be the most appealing for a number of reasons.

First, she used less sugar than most in her bread, and given that I often eat this treat for breakfast, I find a less sweet version more appealing.  Second, her addition of orange juice and zest adds a depth of flavor that makes this bread truly memorable.  There is hardly anything better (for breakfast, or at any other point in the day) than to toast up a thick slice of this goodness, slather it was some lovely salted butter, and luxuriate in its tender, tart-sweetness.