This post is less about a recipe than it is about a concept of a meal.  I whipped up this steak salad a few days back from a great variety of goodies in the fridge, it was the perfect meal for a warm spring evening.  Once I had everything arranged on the platter I drizzled a quick homemade balsamic vinaigrette over the whole shebang and served it up with a crispy artisan loaf fresh from the oven.  As simple as this dish was, I was amazed that so many at the table commented on how they never think to make a salad like this as a way to use up leftover meat.

END_OF_DOCUMENT_TOKEN_TO_BE_REPLACED

I don’t need to complete the rest of that limerick for you now, do I?

I didn’t think so.

The fact is, that little ditty is burned into the minds of most kids by the time they’re ten years old, and may go a long way toward explaining why so many people have an aversion to eating beans. Let’s face it, the social implications of a poorly timed meal rich with beans can be staggering, especially for folks who don’t eat them as a normal part of their diet. You see, our bodies tend to adjust over time to the gas producing effects of beans, lessening their impact on our digestive tracts the more that we eat them. This is a good thing, because as an inexpensive source of protein that is low in fat and high in fiber and nutrients, we should all be cooking with, and eating more beans.

END_OF_DOCUMENT_TOKEN_TO_BE_REPLACED

It's been a while since we've had brussels sprouts around here so when I saw some small, lovely ones at the market the other day I just had to buy them.  For those of you out there like me that HATED them as a kid, I urge you to give them another try.  If your childhood experience with the little buggers was anything like mine, and you submitted to eating overcooked, sour, disintegrating slug-like morsels whenever your mom whipped them up (sorry mom, I know that's the way everyone cooked them back then), then it's time to give them another try.

END_OF_DOCUMENT_TOKEN_TO_BE_REPLACED 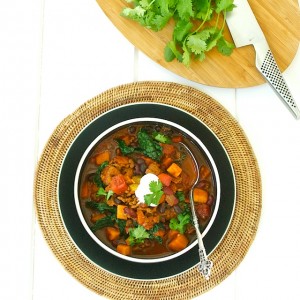 A few weeks back I cooked a dish very similar to this for a Cooking Matters class I was teaching in Charlestown.  The theme for the week was how to incorporate more vegetables in our cooking, and it was a recipe I hadn't yet taught to a class and so was excited to try it.  My friend, and class coordinator extraordinaire, Michelle brought along a sweet potato which wasn't called for, but really added to the dish….it was awesome, and all of our students raved about it.

END_OF_DOCUMENT_TOKEN_TO_BE_REPLACED

Here's another great meatless recipe that includes some of our favorite veggies and fruits.  We love making soups and stews of all sorts this time of year as they are great to have in the freezer for a quick weeknight meal when you just don't have time for anything else.  Heat a pot full of soup, toss together a quick salad, warm a loaf of crusty bread, and all is good with the world.

END_OF_DOCUMENT_TOKEN_TO_BE_REPLACED

This recipe was inspired by one I found in a Whole Foods magazine recently.  I was excited to play with it last week not only because of its lovely green and red holiday appearance (the greens look a bit like a Christmas tree, don't you think?), but because kale and pork are always welcome guests at our table.  I love recipes that offer a simple sauce to accompany pork because let's face it, plain pork tenderloin is a yawn.  As for the kale, it is so versatile and SO GOOD for you, it is something I'm trying to incorporate into our diet more and more.  So much so that I'm thinking about a kale based new year's resolution.

END_OF_DOCUMENT_TOKEN_TO_BE_REPLACED 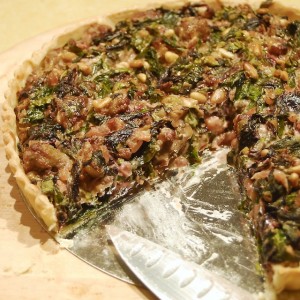 Let me just start by saying that I could eat this tart every day of the week and be a very happy camper.  Of course, my doctor might have something to say about a diet that consisted of wedge after wedge of this deliciousness, but I'm just sayin'.

Look, I love chard just simply sauteed with a little garlic, some EVOO and maybe a few red pepper flakes, but the kids…..not so much.  They are much more liable to snarf down this super-nutritious veggie if surrounded by a buttery crust, some melted goat cheese, and a few chunks of pork sausage.

Hey, can you blame them?

END_OF_DOCUMENT_TOKEN_TO_BE_REPLACED

This dish is one that Grid and I worked on the other day for submission to a Food52 contest for their best "Corn Off the Cob" recipe.  At first, I thought of submitting a succotash, which is a favorite summer dish of mine, but I've always wanted to work up a recipe for a creamy sweet corn soup, and this contest provided a perfect excuse to do just that.

END_OF_DOCUMENT_TOKEN_TO_BE_REPLACED

This is a recipe I found last fall when I had an abundance of green tomatoes from my garden, and found a lot more at my local farmer's market that were practically being given away.  At about the same time I made my batch of chutney, my friend Winnie at Healthy Green Kitchen posted a version of this very same chutney (what is it they say about great minds?), so I decided to hold mine back for a later date.  When I saw a farmer selling a bunch of green tomatoes at Thursday's farmer's market (many farmers don't just sell green tomatoes at the end of the season), I was reminded of this tasty treat and wanted to get the recipe out to you.

Winnie adapted her awesome chutney by altering the spices and sugar some, mine is just as Tom Colicchio wrote the recipe in his great cookbook, Think Like a Chef .  Try either recipe, or play doctor and come up with your own spin.  Either way you go, you'll end up with a dead-simple recipe that will yield a delicious condiment that will enhance anything you serve it alongside.  Really, this is good with beef, pork, lamb, poultry, seafood…you name it.

END_OF_DOCUMENT_TOKEN_TO_BE_REPLACED

I know, I'm about two years behind the craze with this dish.

I'm hoping though, because I'm SO late to the kale chip party, that by sharing them with you today I'll actually be introducing them to all you food blog readers who like me, missed the first wave of excitement over them when they were foodie's darlings a few years back.

I've seen so many recipes for these on-line that its clear there was a bit of a kale chip craze at one point, much like the "macaron" frenzy that seems to be in constant force on food blogs.

Now, having eaten more than my fair share of fabulous macarons during my time in France, I get how they can fuel a never ending obsession among foodies the world over.

But kale chips…..are you kidding me?