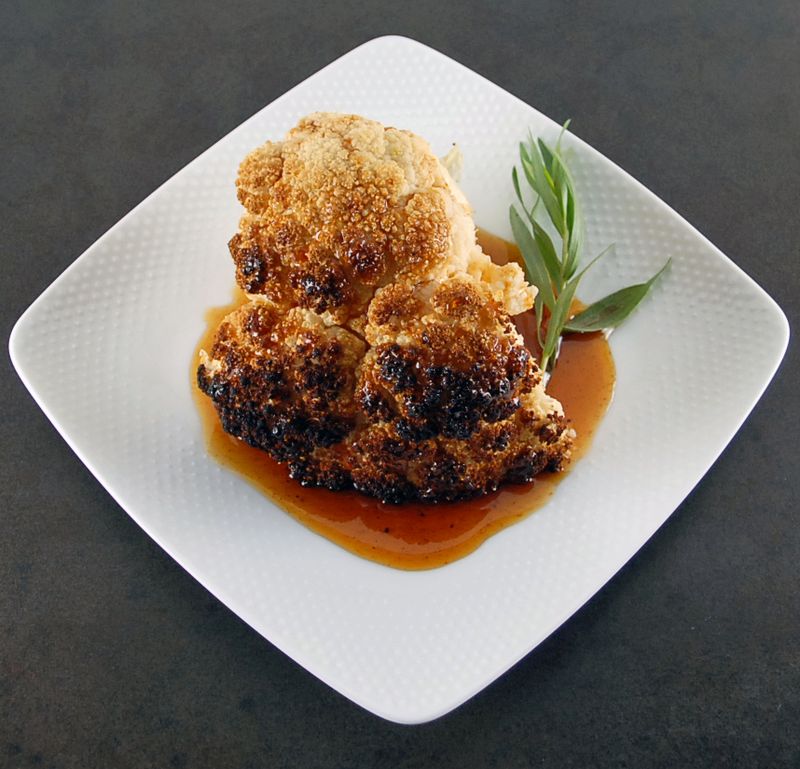 Until very recently, whenever I’d pass the cauliflower display in my local market, I’d mumble to myself….”what the #$%^ do people do with cauliflower anyway?”  I mean, I’m a cook with fairly well rounded tastes, comfortable cooking and eating just about anything, but for some reason, I have avoided, ignored, and dismissed cauliflower for years.  It could be that I never remember having it as a kid, it just wasn’t a part of my mom’s cooking routine, and therefore I never developed a taste for it when I was young.  It could be that the few times I’ve had it served to me and actually liked it, it was either deep fried, or drowning in a cheese sauce, and as much as I’m a fan of cheese and ANYTHING fried, to me, that whole route seems to defeat the purpose of eating vegetables in the first place.

Whatever the reason for the lack of cauliflower in my kitchen, a few days ago I found myself staring at a large pyramid display of the buggers at my local Whole Foods, and decided that it was time to make friends with the weird albino vegetable wrapped in cellophane.  I bought a head of it, drove home, and proceeded to scour my cookbooks for a suitable recipe with which to end my cauliflower drought.  It didn’t take me long to find this one in one of my favorite cookbooks, The Olives Table: Over 160 Recipes from the Critically Acclaimed Restaurant and Home Kitchen of Todd English

.  It is a breeze to throw together, easy for one of the kids to prep in its entirety, and is really delicious in a way I never thought cauliflower could be….like without being a “deep fried cheese bomb”.

I’m OK dressing up veggies with herbs, spices or a light sauce in order to keep them interesting and get the kids to like them, but I do think its important to let them know they’re actually eating veggies by not working so hard to disguise them entirely.  I want the kids to learn to love veggies for their purity of flavor and wholesome goodness, and not because they are a vehicle for more deep fried fat in their diet.  This recipe scores nicely in that regard.