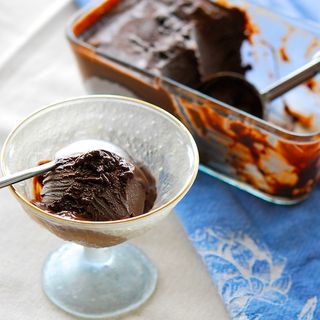 I’m not one of those people that can sit on the couch at 9 PM with a pint of Ben and Jerry’s, fire up Netflix and call it a night.

Actually, let me rephrase…..I can TOTALLY do that, I just try very hard not too because with every passing year, those night time indulgences get harder to work off the next day.  Hear what I’m sayin’?

That said, I do have a sweet tooth.

Not a monster one, but one that pretty much calls out to me every night just after dinner and pleads for just a touch of something sweet.  So when the beast needs to be fed I try to look for intensely flavored, totally satisfying treats so that just a little taste will quell the hankerin’. This is a little trick I learned while living in France, and is one of the primary reasons (in my humble opinion) the French don’t struggle with obesity the way we do in the States.  It’s all about portion control.

The French learned eons ago that just a small serving of a well crafted, high quality confection can satisfy far more completely than a whole trough of mediocre sweets and that is key.  I remember bringing the boys to Berthillon shortly after we arrived in Paris for a few scoops of their famous ice cream, then watching the looks on their faces as the server presented a cone with 2 “boules” of ice cream on it, each just slightly larger than a ping-pong ball.

I can still hear their little voices whispering……”The horror……the horror”.

The boys, who were used to American sized “kiddie cones” that were big enough to choke a horse, were appalled at the scant size of the Berthillon serving.  That was, until they tasted it.   Then the game became all about eating the cone as slowly as possible so as to savour every last morsel of the insanely good ice cream; whereas their habit at home had been to race through it to keep it from melting down their forearms, hardly tasting it at all.  By the end of our time there it was amazing just how long they could make a “deux boule” Berthillon cone last, and just how much joy they could extract from such a compact treat.

While this Marcella Hazan recipe has an Italian pedigree and not a French, the concept is the same.  This intensely flavored gelato which calls for using whole milk and not cream (the fat of which tends to dull flavors) in the mix, along with bittersweet chocolate and unsweetened cocoa powder, make this an absolute choco-bomb of a dessert.  It is so dark and satisfying that just a little dab’ll do ya….exactly what the doctor ordered.